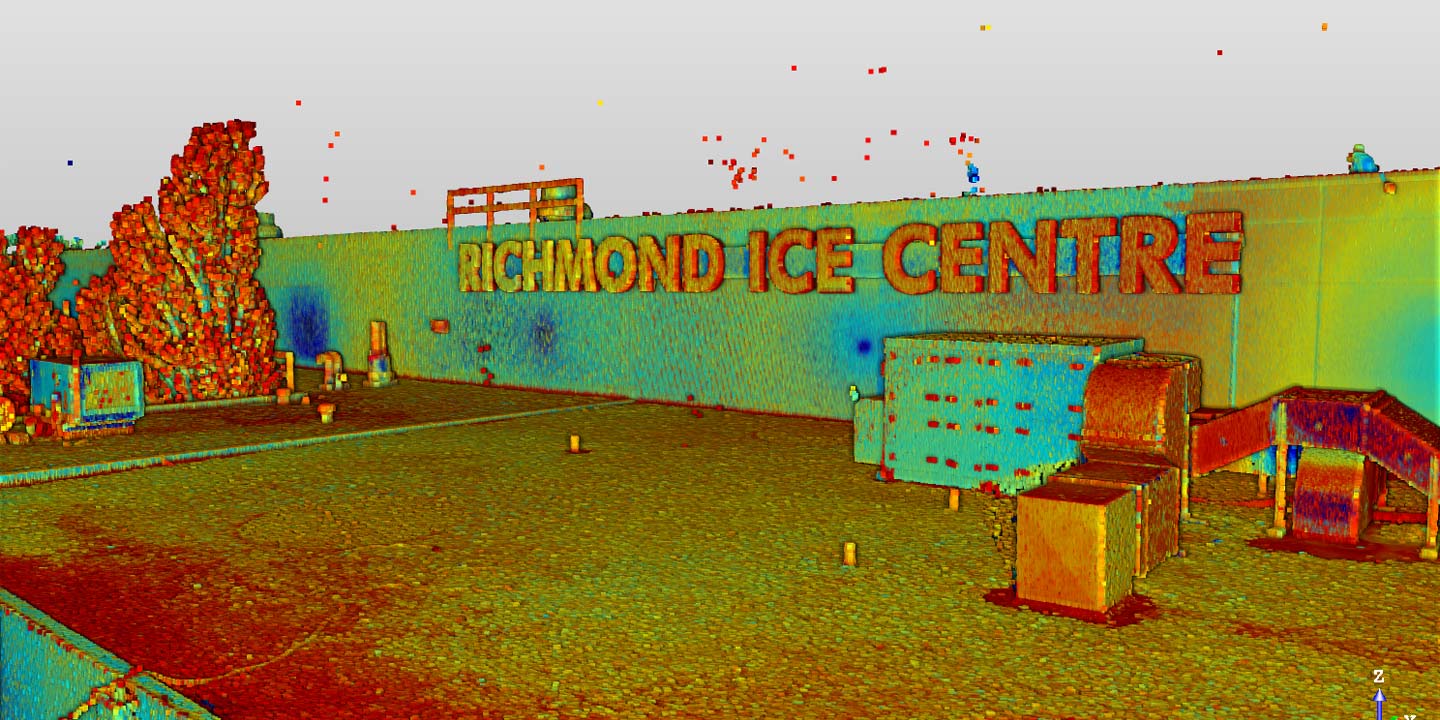 How Do You Scan Six Hockey Rinks and 24 Dressing Rooms During a Pandemic – While the Rinks are Open?


When an architectural firm engaged Van Bower Construction Services Ltd to update the as-built drawings of the 170,000-square-foot Richmond Ice Centre using laser scanning, they knew it would be a challenging project. 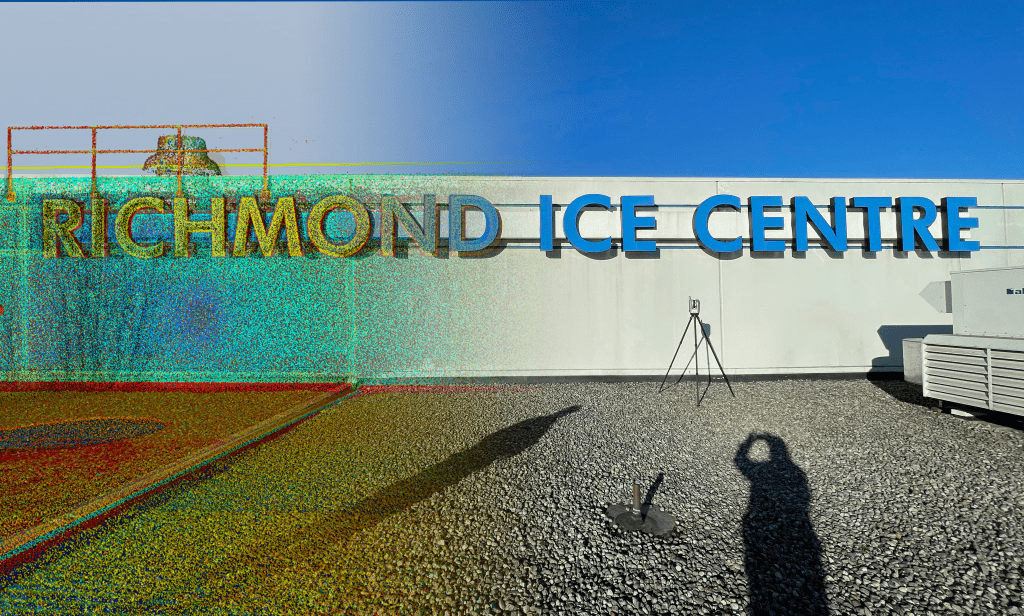 Although social distancing had reduced the facility’s activity pace, it was still very much open for business. The team would have to work around the flow of residents taking part in scheduled recreational activities throughout the day.

Reflective surfaces also pose unique challenges for 3D scanning with lasers. The ice and the “hockey glass” above the boards in each rink would be particularly demanding to scan and process accurately. 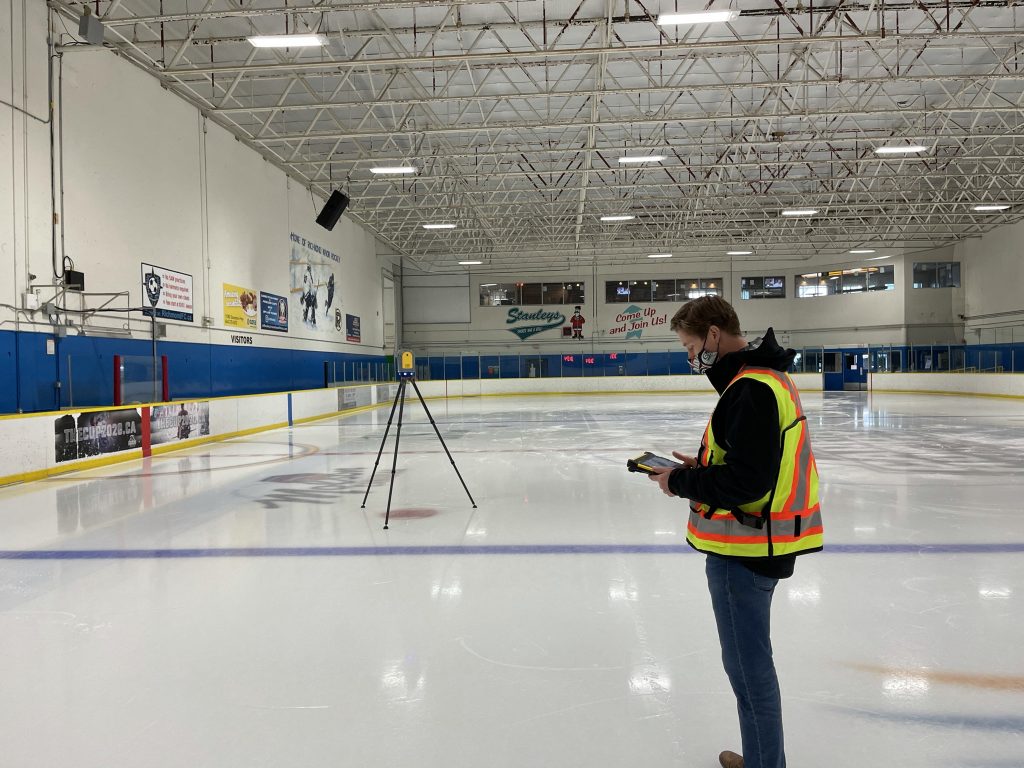 A Fleet of Trimble Scanners from BuildingPoint Canada

Fortunately, Van Bower had a fleet of Trimble scanners. These included two Trimble X7 scanners for the interior and exterior of the building. The Trimble TX5 was ideal for tight spaces such as the mechanical rooms. For larger areas, such as the skating rinks, the crew relied on the ability of a Trimble TX8 provided by BuildingPoint Canada to accommodate longer ranges in minute detail. 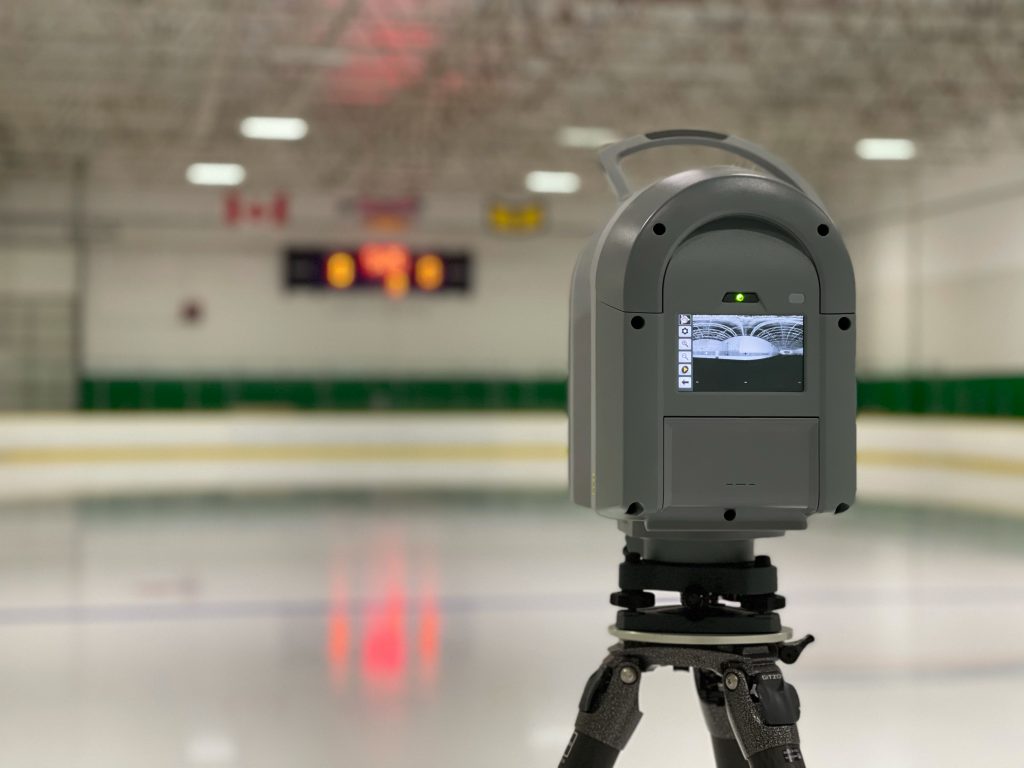 Trimble’s 3D laser scanning tools reliably collect millions of measurable data points with pinpoint accuracy in mere seconds. The datasets they generate are accurate, measurable, and shareable, which takes the guesswork out of interpreting or applying the data in other projects later on.

Since the datasets Van Bower would be producing would encompass the mechanical, electrical, and plumbing (MEP) systems and the plenum spaces dedicated to heating and ventilation, accurate measurements were vital to project success.

Adding to the complexity was the fact that the facility remained in use throughout the scanning process. The crew had to work around hockey practices and recreational activities surrounding them. Scanning time would be strictly scheduled when facilities were idle, and the crew’s tasks were subject to tight timelines. 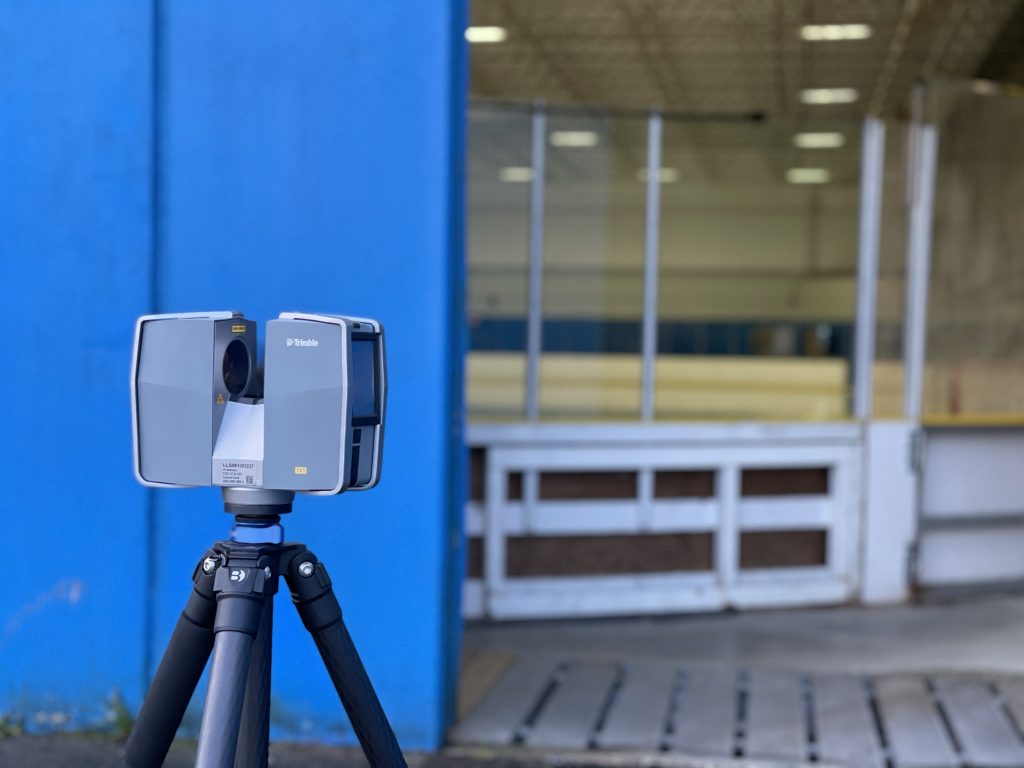 So, rather than dividing the facility up into logical segments and flowing through the scanning tasks sequentially, the team was forced to work opportunistically. When an area of the facility was idle, the crew would pounce, capturing the required measurements and vacating the space just as new recreational activities were about to begin.

The crew often found themselves in situations where, for example, they were measuring a dressing room at one end of the facility and had to drop everything and scurry across the building to one of the rinks to scan its dimensions at the appointed time.

To ensure accuracy, the crew allowed for substantial overlap in their scanning activity. The crew’s intense, time-sensitive activity resulted in over 1,200 individual scans representing the entire structure, inside and out – including the roof. 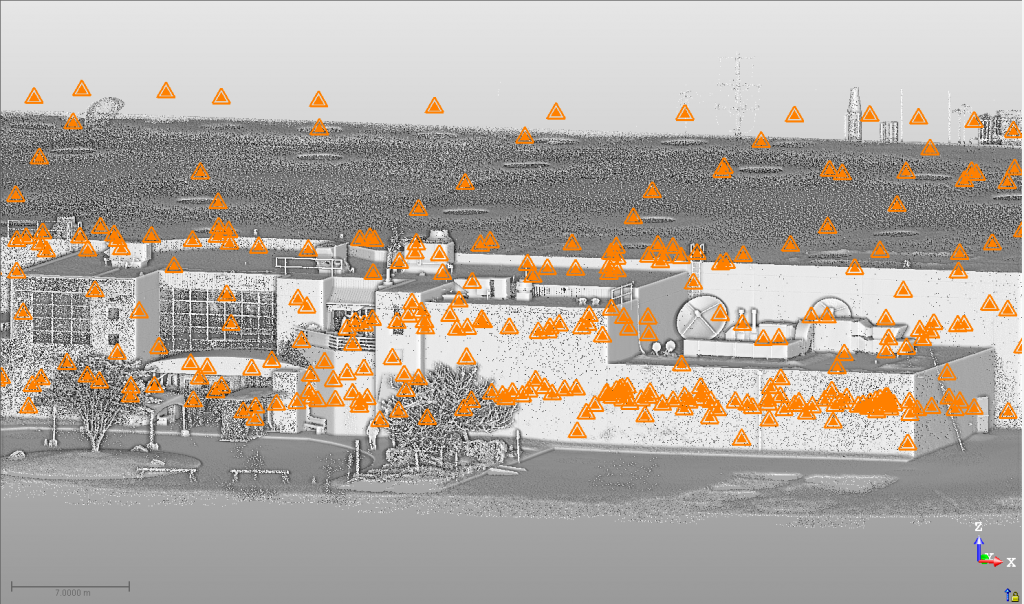 Staff had to identify and assemble each of these scans into a coherent dataset representing the entire building. As Van Bower’s Scott Harkness put it, “It’s just like building a 1,200-piece puzzle. You have to go through and pick your pieces and methodically put it all together.”

Remarkably, Van Bower achieved an overall accuracy of within millimetres for the entire project. The workhorse of the operation was the Trimble X7. It was the tool used for roughly 80% of the scans the crew performed. The compact TX5 was the tool of choice for cramped quarters, and the larger TX8 was ideal for long-range scans of open spaces like the ice rinks. 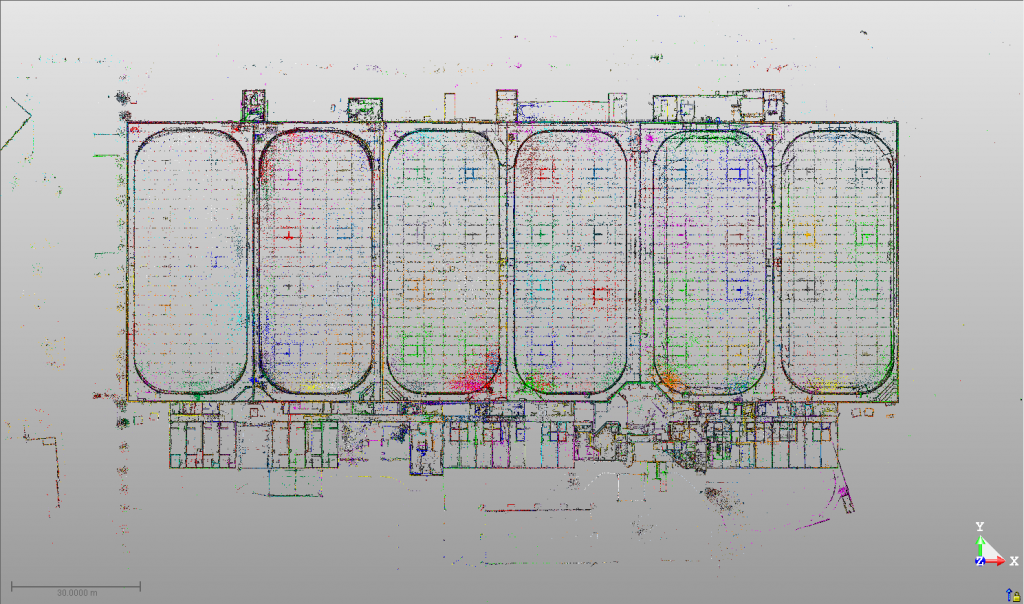 The Trimble X7 works with a tablet, enabling it to register data in the field via Trimble Field Link software. It can also organize and integrate scanning data more effectively, thus saving time spent in the office handling basic field registration. The efficiencies in field registration supported the piecemeal approach that the crew was forced to follow and facilitated data integration from all the scanners. Harkness estimates the X7 allowed the team to complete the scanning operations in one-third of the usual time. The tablet’s field registration ability helped the team work more effectively and also reduced stress. As Harkness explained, “Having the tablet to build the view while we pick it up and know that we have enough data to do our cloud-to-cloud registration, when we get back to the office is critical. It just helps with your confidence when picking up data.”

Trimble’s Field Link software was another vital tool in delivering this large-scale, complex undertaking. Having Field Link available onsite provided the team with views of each scan they had completed. They could review and validate them all before loading them into Trimble RealWorks. Onsite reviews saved time and streamlined the sorting process later on.

“The X7’s capabilities are really what led us to take on a project of this size,” said Harkness. “Having that ability to manage your data and organize it all in the field is, is why I think we were able to take (this project) on.”

If you’d like to learn more about how Van Bower delivered these outstanding results or about Trimble’s portfolio of 3D scanning solutions you can trust, feel free to contact us. We can organize a product demo to show you firsthand how our tools can help your company capture data quickly and safely with immense detail and accuracy. 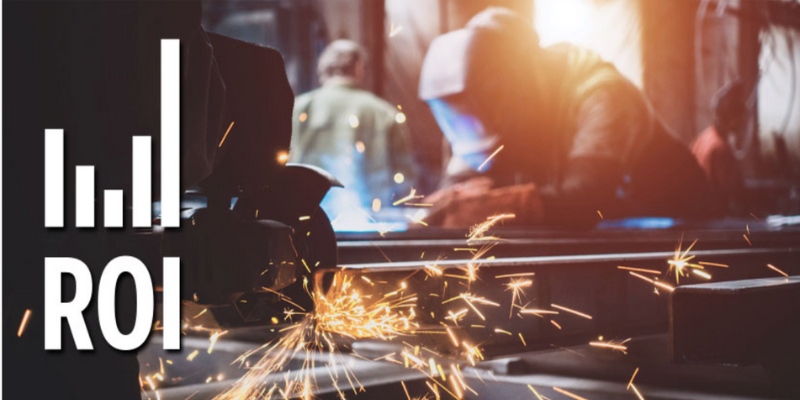 What’s in it for me? ROI matters

How to Determine the ROI on your MIS Tool Investment Management Information Systems are a business imperative for many fabricators who need to better organize their data and procedures. If you are considering purchasing a MIS, you probably expect to get more value out of your MIS tool than what you pay for it. Your 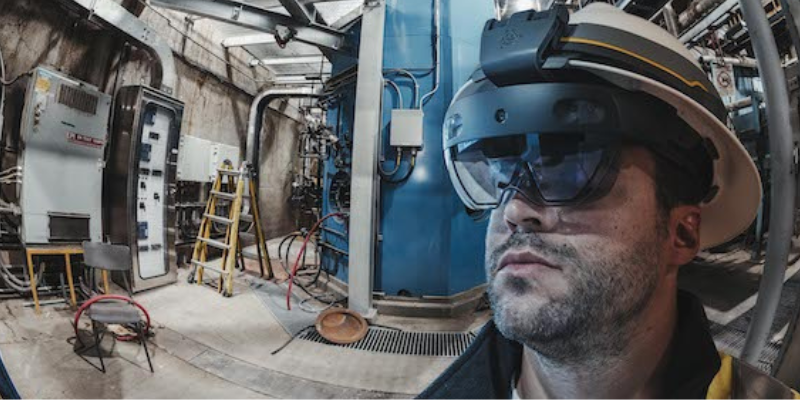 MA-TH, a multi-disciplinary engineering firm and a customer of BuildingPoint Canada, had great success with the Trimble XR10 with HoloLens 2 helping a customer avoid two major modifications from happening during a factory expansion project. Find out how you can effectively collaborate with your customers and save on unnecessary costs. 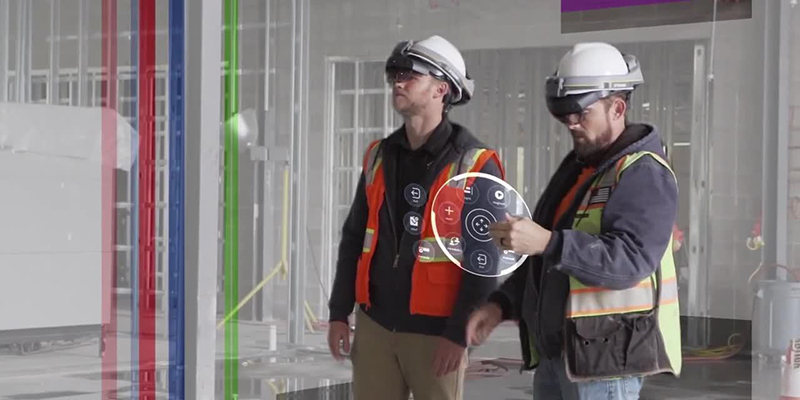 Unlock the Value of AR, MR, and VR for Construction

Discover the benefits of the technology for your business. AR, MR and VR provide an augmentation system that enhances your existing workflows and help you make the most of your information resources. Construction companies are using these innovations today to improve their design processes and identify opportunities for improvement before installation and construction even begins. 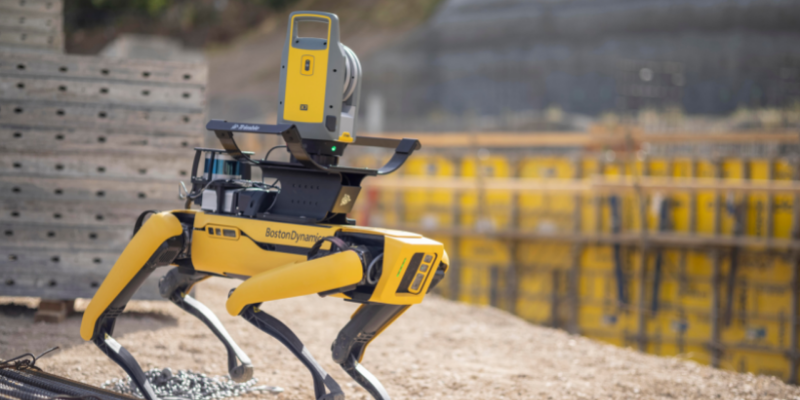 5 Reasons to Add a Robot Dog to Your Construction Crew

Autonomous robots have become a reality in the construction industry. One great example is Trimble’s robotic dog, affectionately known as Spot, which combines Boston Dynamic’s world-leading robotic technology with Trimble’s X7 scanner. But should you consider a robotic dog for your construction operation? Here are some of the reasons why a robotic dog might make

The opening and closing ceremonies at the recent Winter Olympics in Beijing gave us another chance to view the distinctive Beijing National Stadium – known affectionately as the ‘Bird’s Nest’. The facility earned that nickname from its irregular structure. The roof is saddle-shaped while the façade is inclined vertically at approximately 13 degrees. Building the